Often by chance, via out-of-the-way card catalogues, or through previous web surfing, a particular “deep” text, or a simple object […] reveals itself here at the surface of the visible, by mystic documentary telepathy. Quickly–precariously–coming as it does from an opposite direction.  If you are lucky, you may experience a moment before.

This exhibition presents never-before exhibited work by three artists whose research-based practices have drawn them to the work of historical women artists Marianne Brandt (for Brown), Theresa Hak Kyung Cha (for Hinrichs) and Mina Loy (for Ritter), whose own production and memory has been overlooked or stifled within the art historical canon. Presented in dialogue with Beginning with the Seventies: Activism, Art and Archives, a multi-year project initiated at the Morris and Helen Belkin Art Gallery and curated by Lorna Brown, the object-based works in Some Spontaneous Particulars demonstrate particular concern for a material handling of the past, as a means to query the act and implications of retrieval, the ethics of translation, and consider the radical potential of a feminist archive.

Vanessa Brown works in sculpture, painting and photography. Her primary medium is steel and she attempts to parse its associations with industry, weaponry and brutality, with its subtler qualities such as pliability, versatility and slightness. The imagery in her work draws from various sources including landscapes, historical crafts, recurring symbols from her own dreams, as well as the work and biographies of other female artists. She is based in Vancouver on unceded Coast Salish Territories. Brown graduated with a BFA from Emily Carr University in 2013 and was the recipient of the Chancellor’s Award. She has exhibited in Canada, Germany, the USA, and Mexico.

Heide Hinrichs works balance ambiguity and contradiction, telling stories of past emotions, mental states and gestures. In this process she often develops a sculptural language that is structured by the semantic exploration of everyday objects and found materials. Recent exhibitions include red offering (Lovenjoel, Belgium),  The Event of a Thread (Dresden, Germany), Kathmandu Triennial (Nepal) and Heidelberger Kunstverein (Germany). Born in Germany, Hinrichs lives and works in Brussels.

Kathleen Ritter is an artist based in Paris. She was an artist in residence at La Cité Internationale des Arts, Paris, in 2013. Her art practice broadly explores questions of visibility, especially in relation to systems of power, language and technology. Recent solo exhibitions took place at G Gallery, Toronto, and Battat Contemporary, Montréal, both in 2014. In addition Ritter has organized exhibitions in Canada and abroad. Her writing on contemporary art has appeared in ESSE, Prefix Photo, and Fillip as well as in numerous catalogues. 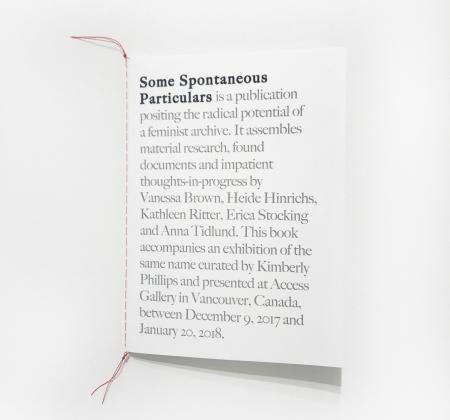 In Conversation: Some Spontaneous Particulars from Access Gallery on Vimeo.

1.a.
This project began with my pause over a particularly beguiling passage in Susan Howe’s 2014 book-length poem Spontaneous Particulars: The Telepathy of Archives. It reads:

Often by chance, via out-of-the-way card catalogues, or through previous web surfing, a particular “deep” text, or a simple object […] reveals itself here at the surface of the visible, by mystic documentary telepathy. Quickly–precariously–coming as it does from an opposite direction.  If you are lucky, you may experience a moment before.

I imagine a telepathic archive: it reaches through the thick opacity of all that has been gathered and catalogued (gathered and forgotten) to disclose itself like a shard of glass. It startles you with its sudden presentness, with its insistent, extrasensory grip. It doesn’t wait to be found, but reveals itself.

1.b.
This project began with my indignance over the same passage in Spontaneous Particulars: The Telepathy of Archives. I imagine a telepathic archive: is this idea not buoyed by our incessant longing for things to reveal themselves to us? I feel we await this visitation at our peril. Things do not appear, but must be searched for laboriously. Hauled out. Handled. Carried on.

1.c.
This project began with the weariness that accompanies my being a woman.

1.d.
This project is an impatient homage. It recognizes its partiality. It queries the implications of retrieval, the ethics of translation. It gathers together women artists whose material handling is a means of bringing form to that which has been passed over, wrongly attributed, or quietly endured. Its choreography is inquisitive and outraged. It posits making as an incomplete act of admiration, persistence and solidarity.

2.
Vanessa Brown is a sculptor who works primarily in steel. She attempts to parse its associations with industry, weaponry and brutality from its subtler qualities such as pliability, versatility and slightness. The imagery in Brown’s work draws from a number of sources including landscapes, historical craft, recurring symbols from her own dreams, as well as the biographies and work of other female artists. Her contribution to this project, a new work titled Marianne, considers the conditions under which the German sculptor, designer and photographer Marianne Brandt (1893 - 1983) studied and worked at the Bauhaus. Brandt became the first woman to join the Bauhaus’ metal workshop at a time when women students were relegated to the weaving and ceramics studios, and she became head of that workshop in 1928. Marianne pulls from Brandt’s own lexicon of forms and, like an intimate memoir or portrait, offers elliptical references to biographical details, labour, and the cyclical passage of time through her use of shape and line.

3.
Purposely balancing ambiguity and contradiction, Heide Hinrichs’ object-based works tell stories of past emotions, mental states and gestures. In this process she often develops a sculptural language that is structured by the semantic exploration of everyday objects and found materials. For a long while Hinrichs’ focus has been on the work of Korean-American conceptual artist Theresa Hak Kyung Cha (1951 - 1982). In particular, she investigates Cha’s magnum opus, Dictée, a genre-defying book known for its highly experimental use of language, polyphonic voice and visual structure drawn from Cha’s own work in avant garde video and performance. Through the voices of several women―including Joan of Arc, the early 20th century Korean revolutionary Yu Guan Soon, Cha’s mother Hyun Soon Huo, and Cha herself―Dictée considers a woman’s struggle to speak, and the many conditions that constrain and twist her utterances. Hinrichs’ work white, floating developed in the context of her translation of Dictée into German. white, floating conjures a mental space through the looping of two video projections: film scenes mentioned fleetingly in the ERATO-LOVE POETRY chapter of Dictée. Facing one another and positioned so closely as to render them nearly impossible to view, except perhaps by the other film scene itself, the projections together create a charged space―at once empty and full―suggestive of the inchoateness of both translation and memory.

4.
Kathleen Ritter’s art practice explores questions of visibility and furtiveness, especially in relation to systems of power, gender, language and technology. In a related series of works brought together for this project, Ritter examines the life and work of Mina Loy (1882 - 1966), an artist, inventor, poet and feminist, active in the first decades of the twentieth century. Concerned with the implications of both retrieval and translation, Ritter first uncovers and then brings into material form a number of unrealized propositions drafted on paper by Loy, including the schematic for a modular alphabet and a pattern for dress material. Together with a framed serigraphic portrait reproduced from a 1905 photograph of Loy, and an unlimited edition―printed on newsprint and translated into shorthand―of Loy’s 1914 Feminist Manifesto (a polemical response to the Futurists’ rampant misogyny), Ritter enacts both an homage and a material re-insertion of Loy’s explosive presence into contemporary life.

With gratitude as guests, Access is located on the unceded territories of the xʷməθkwəy̓əm (Musqueam), Skwxwú7mesh (Squamish), and Səl̓ílwətaʔ/Selilwitulh (Tsleil-Waututh) Nations.

Access gratefully acknowledges the ongoing support of the following funders as well as our committed family of donors, members, and volunteers, for enabling this organization to remain vigorous and connected to the communities we support.